Some 2016 and later MacBook Pro models appear to be displaying issues with uneven backlighting caused by a delicate and easy-to-break flex cable, which has been dubbed "flexgate."

Impacted machines can feature uneven lighting at the bottom of the screen, which looks a bit like a "stage light" effect, and the display can eventually fail entirely.

According to repair site iFixit, which first highlighted the problem, 2016 and later MacBook Pro machines are using thin, fragile display flex cables that are prone to malfunctioning with repeated closing and opening of the MacBook Pro's display.

The flex cables are loosely wrapped around the display controller board and when the MacBook's display is opened, the cables are pulled tighter, leading to tears and problems over time. 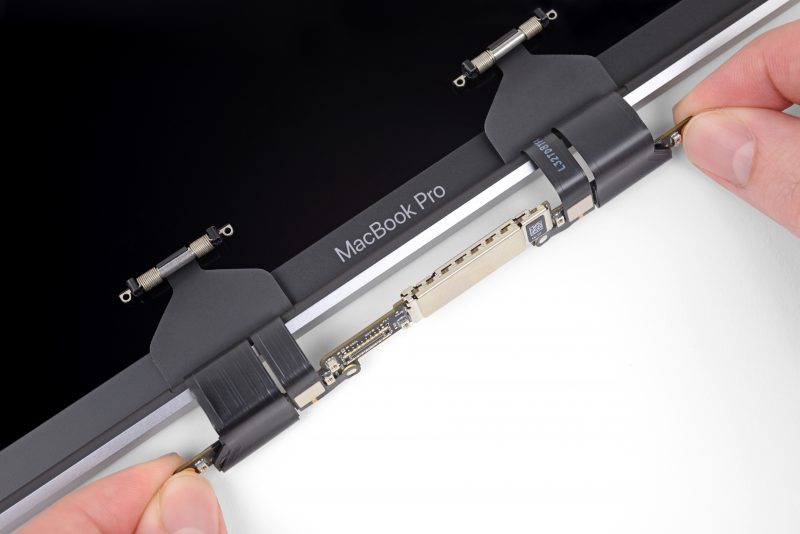 Image via iFixit
iFixit says the backlight cable is usually the one to break first, leading to backlighting issues and eventual display failure.

Which models are affected?

The issue appears to impact any 13 or 15-inch MacBook Pro model manufactured in 2016 and 2017 though it appears to be affecting Touch Bar models more frequently. 2018 models may also be impacted, but Apple did make flex cable changes to these machines that may solve the issue.

Apple introduced a redesigned MacBook Pro in 2016, and this was the first to use the new flex cable. Older MacBook Pro models are not impacted because they use a more durable wire that was routed through the hinge instead of around it, mitigating the stress of repeated display openings.

The new MacBook Air models could also eventually be impacted. While they use a different display cable design, iFixit says the cables also wrap over the display board and could potentially exhibit the same failure. It's not clear yet if that will happen, however.

How long does it take for the problem to show up?

When you first buy a MacBook Pro, the flex cable functions perfectly. With repeated closing and opening of the MacBook Pro's lid, however, the durability can decline, leading to the display issues.

Since it takes time for the cable to break down, machines experiencing this issue generally do not display it for several months to years after purchase. Because it takes time to show up, affected MacBook Pro models may no longer be under the one-year warranty.

Does Apple have a repair program?

Apple in May 2019 launched a Backlight Repair Program designed for 13-inch MacBook Pro models manufactured in 2016.

According to Apple, a "very small percentage" 13-inch MacBook Pro displays from 2016 can exhibit vertical bright areas along the bottom of the screen or a backlight that malfunctions entirely.

Apple will repair affected devices, which includes machines sold between October 2016 and February 2018, for free. Eligible models are listed below:

No other MacBook Pro models are included in the repair program at this time, even if those machines are displaying similar issues.

What do I do if my MacBook Pro has this issue?

If your MacBook Pro has this display issue, the first step is visiting an Apple retail store, an Apple Authorized Service Provider, or contacting Apple support.

Unfortunately, when this problem surfaces, many MacBook Pro models are older than a year and no longer covered by the standard one-year warranty. Those who have an extended AppleCare+ warranty will be able to get their repairs covered by Apple, and Apple is offering free repairs for 2016 13-inch MacBook Pro models displaying this issue.

Customers who do not have AppleCare+ or a 2016 13-inch MacBook Pro may be required to pay out of pocket for repairs. While it's a simple cable that needs replacing, because of the way the MacBook Pro is designed, the flex cable is integrated into the display and requires the entire display assembly to be replaced. This can cost upwards of $600 for customers who are out of the warranty period.

There have been reports of customers no longer under the one-year warranty that have been offered free or reduced cost repairs from Apple, but others have had to pay full price. Without a consistent policy in place, repair outcomes will vary.

How many people are affected?

Just how many MacBook Pro models are experiencing this issue remains unknown, but a growing number of complaints have been surfacing over the course of the last few months. There have been complaints on the MacRumors forums and the Apple Support Communities.

Is there a fix?

Apple has not publicly commented on the Flexgate issues in some 2018 MacBook Pro models, but it appears the company may have quietly implemented a fix in its 2018 machines.

As discovered by iFixit, the cabling responsible for the issue in older machines appears to be about 2mm longer in 2018 MacBook Pro models. The longer length alleviates the stress put on the cable when the hinge is open and closed and it could prevent the cable from weakening due to hinge use.

iFixit isn't certain that the longer cable fixes the issue so it's possible some 2018 machines will still be affected, but they may very well be less prone to this issue.

TopTek System (TTS) is an Apple authorized service provider in Markham with professional and experienced team of Apple Certified Technician. Performing Apple products repair services, under warranty, out of warranty, exchange and repair extensions programs. TopTek system can offer you same day service for iPhone Screen and Battery replacement also we can repair all issues on iPhone, iMac, Macbook Pro, Macbook air and other Apple products. TopTek System can provide service to Markham, Toronto, Richmond Hill, Vaughan and North York regions. Also, TTS expand its services and activities in IT fields included Supporting and Maintenance of IT products of organizations like Laptops and computers, Network and Network Security Services and Managed Network Services.

Our guarantee after service

We guarantee our service, including replacement parts, for 90 days or the remaining term of your Apple warranty or AppleCare plan coverage, whichever is longer. We offer this whenever you get service from us or any other Apple Authorized Service Providers.